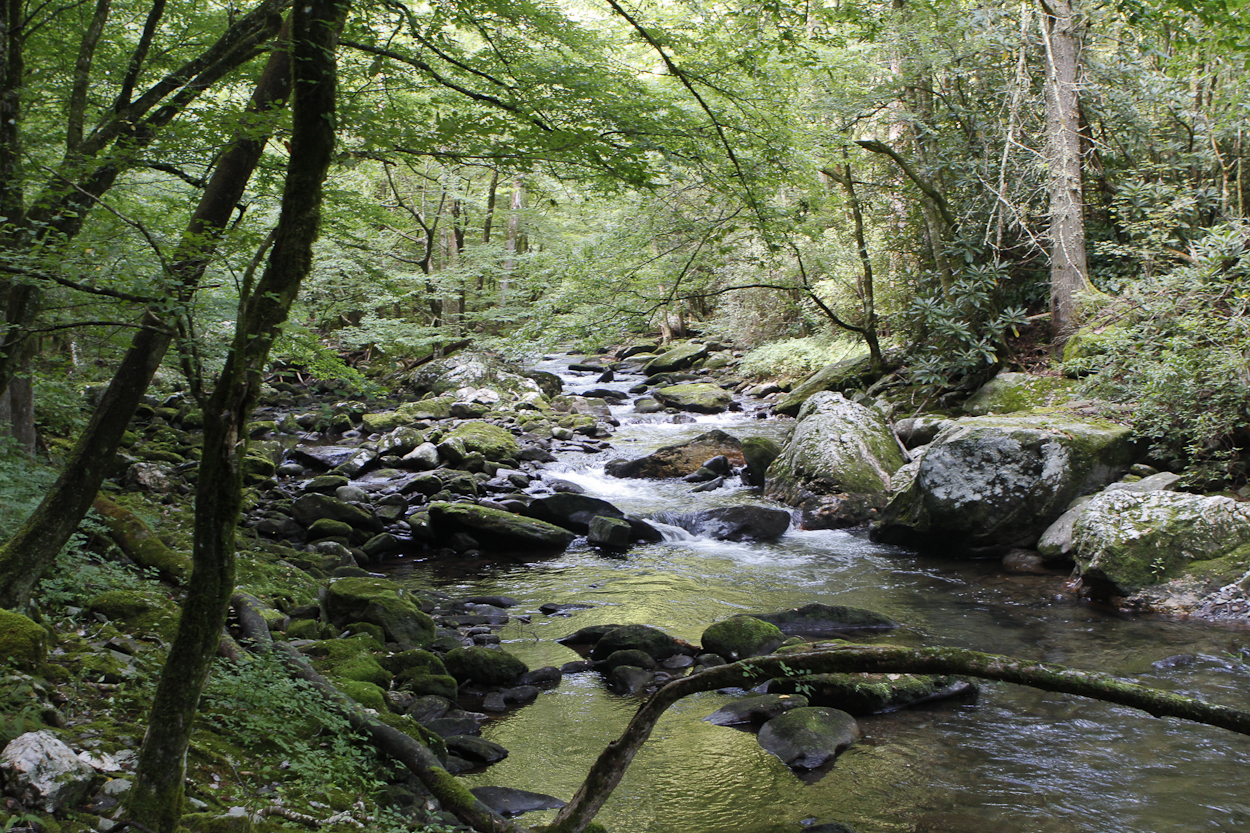 We would have made it into the woods before dark, but instead we stopped at the Tapoco Lodge right over the North Carolina border to see an old friend there cooking pizzas. It was Friday night and we ate sandwiches and drank IPA until sundown, then we made for the Slick Rock Creek trailhead and headed in.

By the time my wife and I made it onto the trail it was nearly pitch black. For a few minutes we could see the fog rising thick off the Little Tennessee River, then nothing but the 40 feet of trail lit by our headlamps. The fog eventually made its way to the trail about 50 feet about the river and visibility dropped even more. 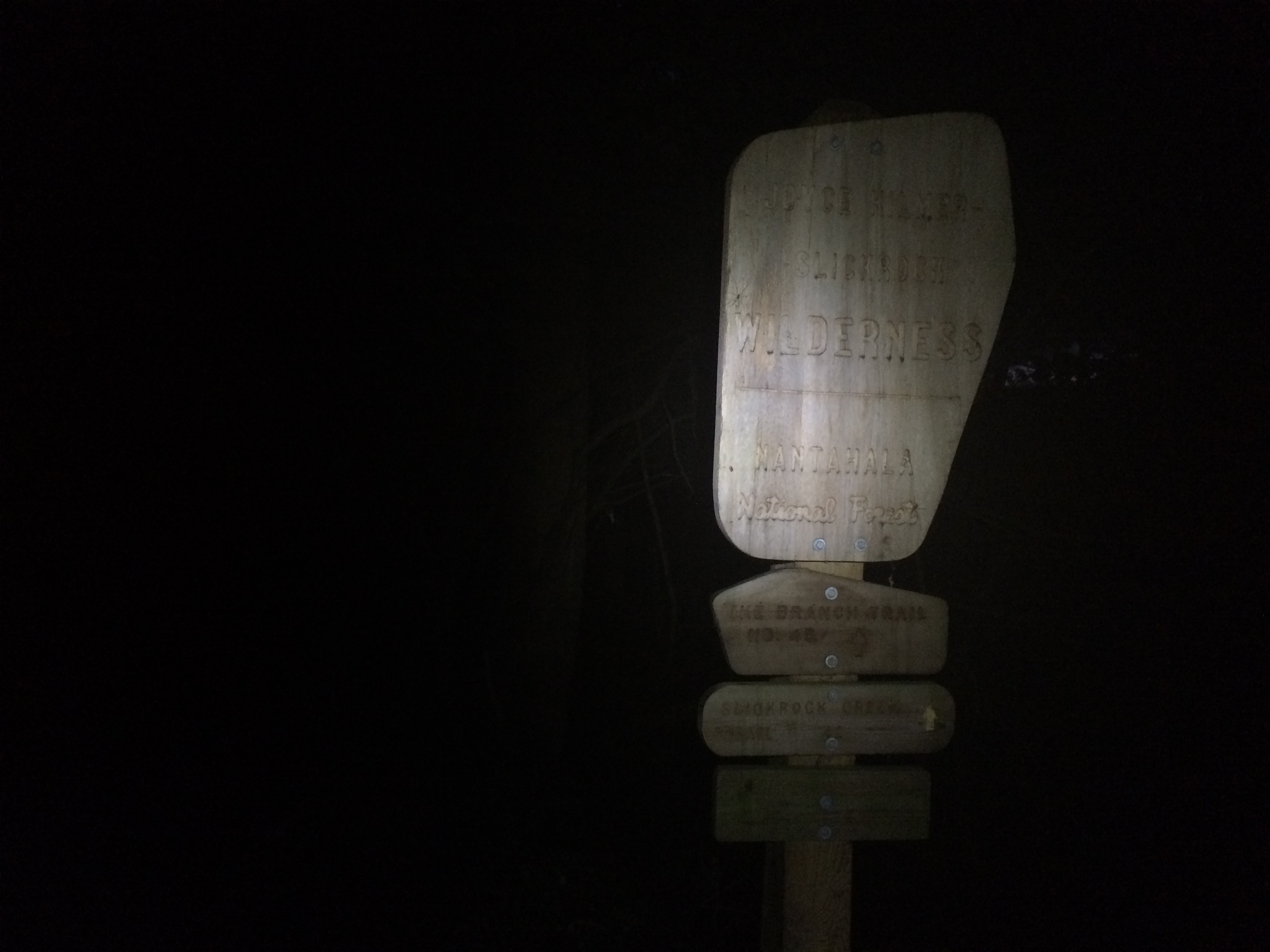 The idea was to walk about 2 miles in and camp at the mouth of Slick Rock Creek where my handy map said there were some primitive campsites. The thing is, when you cross over the state line and leave Tennessee you change national forests, too. So while we were hiking in from the Nantahala-side of this patch of woods, all I had to go by was a map of the Cherokee National Forest with our intended path printed on the fringes.

The temperature couldn’t have been more than 80 degrees Fahrenheit, but the humidity was doing us in. Dripping sweat, my wife’s glasses kept fogging up and falling forward. The dog was even getting tired and tried to turn back a time or two toward the end.

The Slickrock Creek Trail gets pretty narrow as it hugs the hillside and makes the turn into the Slick Rock Creek watershed. I was tracking our progress with a GPS app on my phone and knew we had overshot our intended target. I’m not sure if we missed a cut off in the dark down to the water’s edge and our intended camping spots or if you have to hike on and then cut back. At any rate, just short of three miles I found a steep cut straight down the hill side that ended at the water and a flat spot just big enough for our tent. Half drunk and exhausted, we trudged down and camped next to the rushing water. 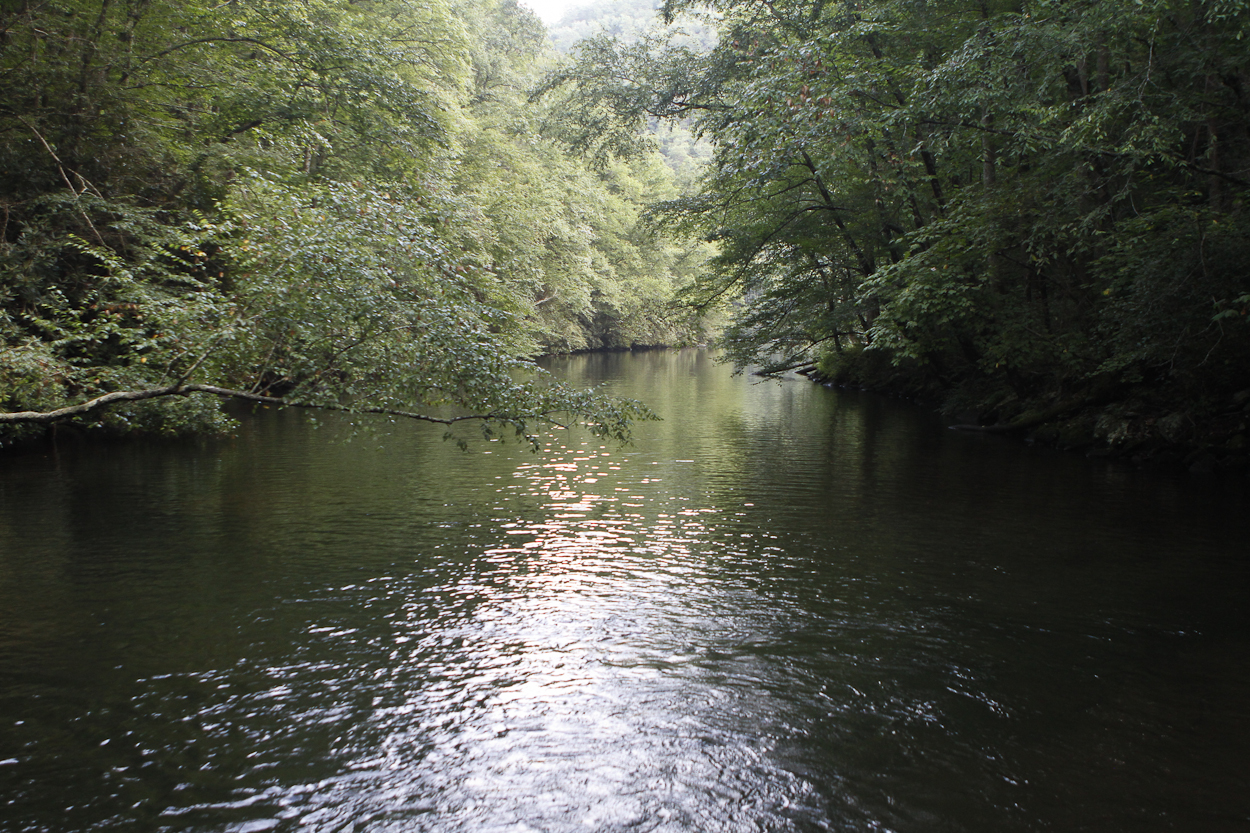 The next morning gave light to the beautiful creek bed spread out in front of us. The small rapids next to our campsite — which happened to be right in the middle of what I guess we’ll call the Lower Slickrock Creek Trail — ripped out into tranquil waters. The rocks were indeed slick.

They say the Joyce Kilmer-Slickrock Wilderness has some of the last old-growth forests in Appalachia, but most of the Slickrock Creek basin was logged back sometime in the 1800s. I don’t know all the technical tree stuff, but I’d guess most of the forest was second-growth since there are still some monsters along the path.

We followed the narrow, winding trail along the water’s edge and into the wilderness. Just after Lower Falls (which, it so happens, look a lot more like a big pool of rapids than a waterfall) we lost the trail. We missed the narrow cut up the hillside and instead spent the next hour wandering up and down the slick rocks of Slickrock Creek looking for a creek crossing that wasn’t. Fortunately, after we doubled back a second time, two hikers came down from the hill and pointed us in the right direction.

Speaking of creek crossings, there were two we had to manage on our jaunt up to Ike Branch. Neither have any real infrastructure or direction, which is part of the fun, but it’s also worth keeping in mind. I took on a little water and my wife soaked a shoe. Thankfully we packaged extra socks.

Around noon we made it to the junction at Ike Branch, a trail that cuts east from Slickrock Creek to Yellowhammer Gap, where it runs with the Benton-McKaye for a brief ways before splitting off back toward the Little Tennessee River. Little did we know that the less-traveled leg of Ike Branch from Slickrock over to Yellow Hammer was littered with downed trails and steep uphill walk arounds. It took more than an hour to make the one-mile cut through, partly because it took some effort to navigate our 60-pound Peach Pit up or under some of the trickier sections of felled trees. The opposite hillside had dozens more trees uprooted and splintered along its steep slopes. 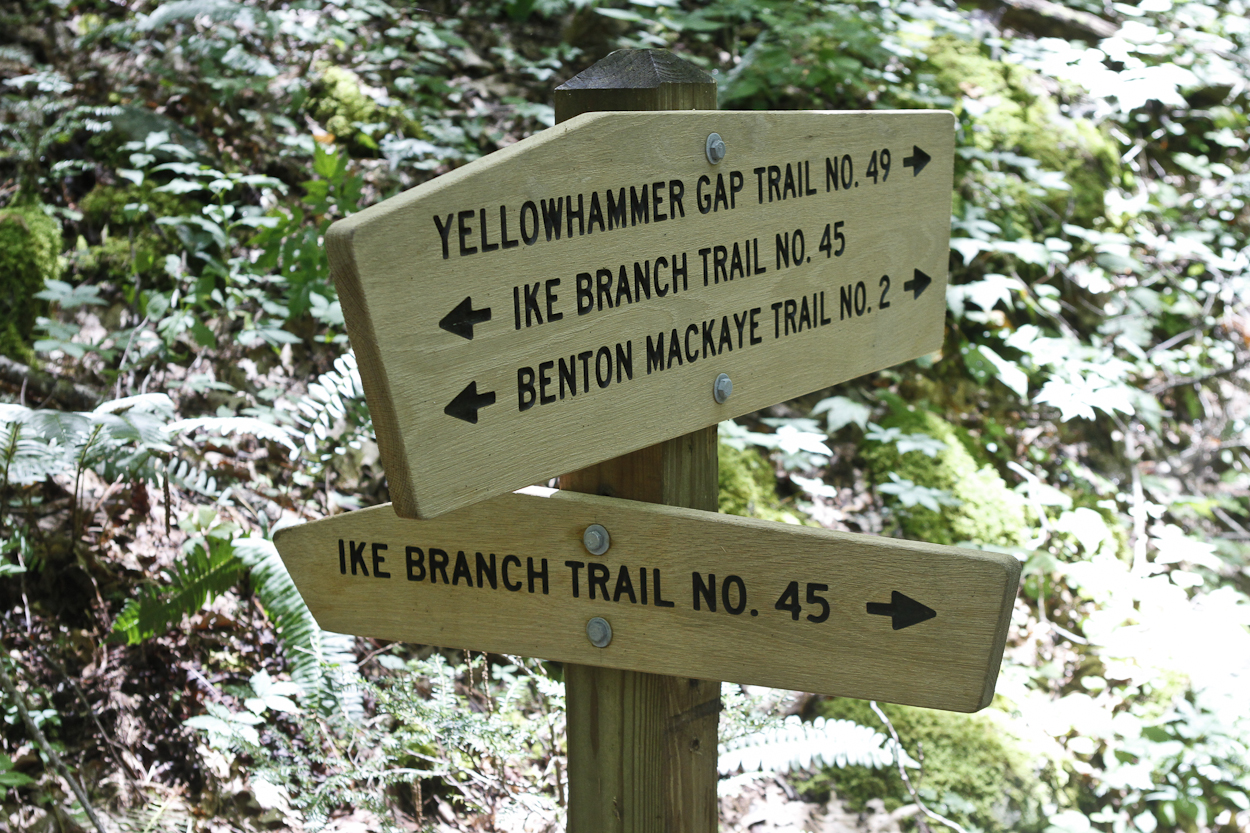 The whole loop was just under 11 miles. We had planned to take it easy and camp along Ike Branch after Yellowhammer gap, but with no free-flowing water at the only camp-able location after the gap, we instead decided to walk out late and make the ride back home that afternoon. We could have made the whole loop in a single day and left the overnight packs in the car, but if you’re looking for an easy overnight loop, try leaving in the morning and hiking to the junction at Ike Branch. There you’ll find a nice flat area and a fire pit next to the stream right at the half-way point.

Next time I hope to make it further up Slickrock Creek to Wildcat Falls. 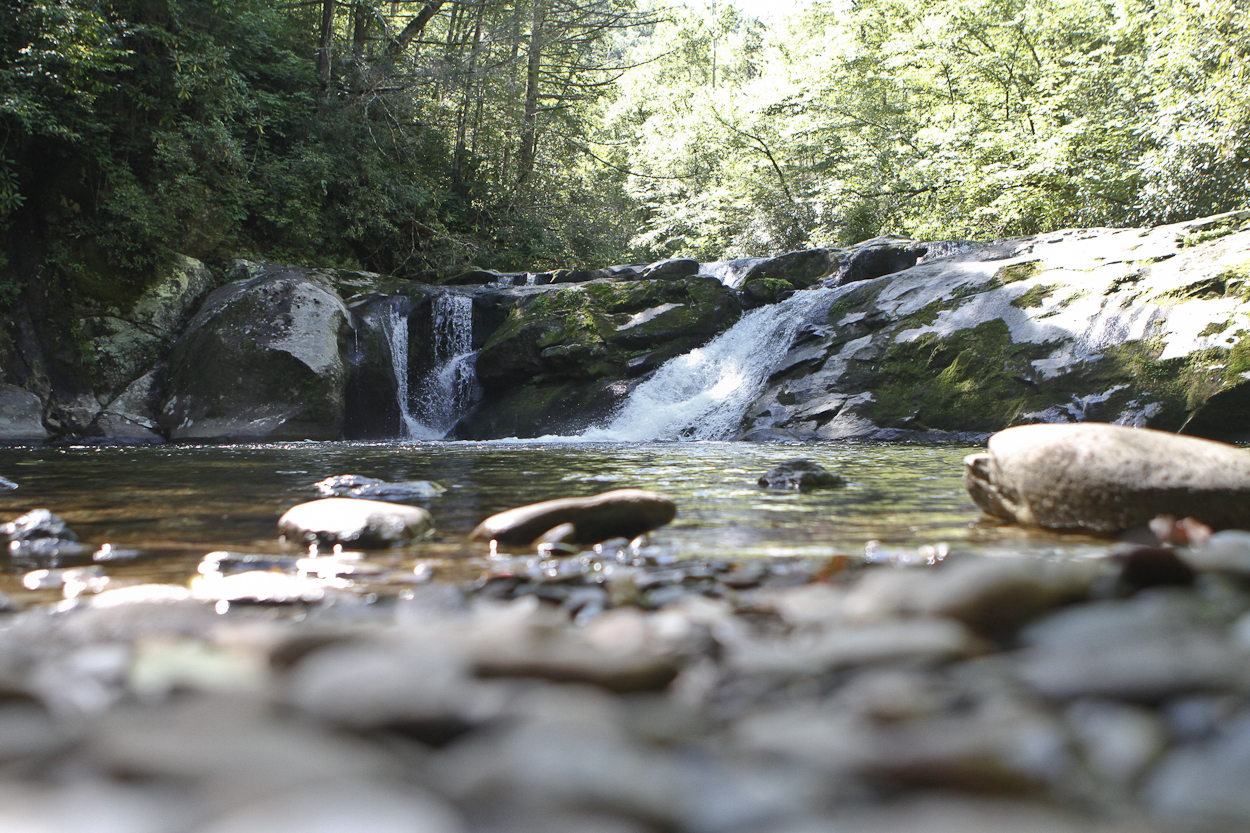 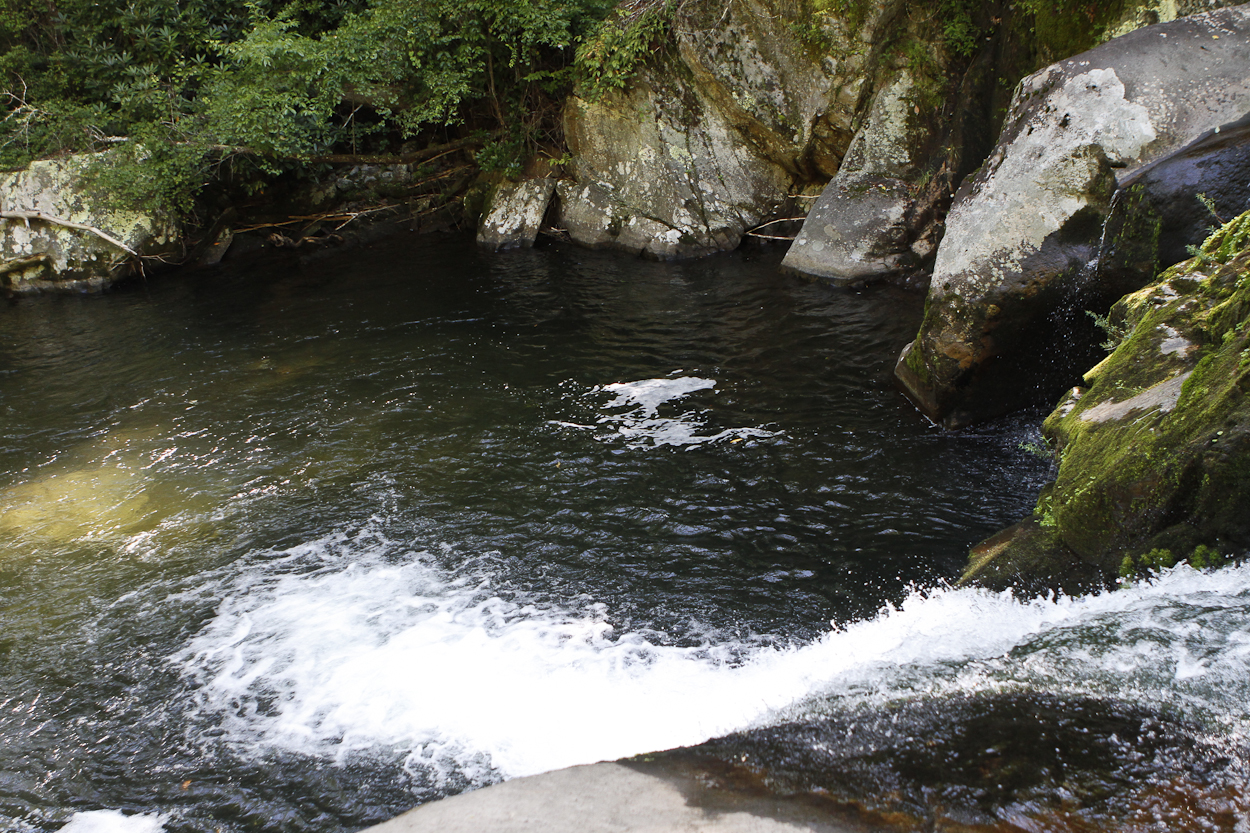 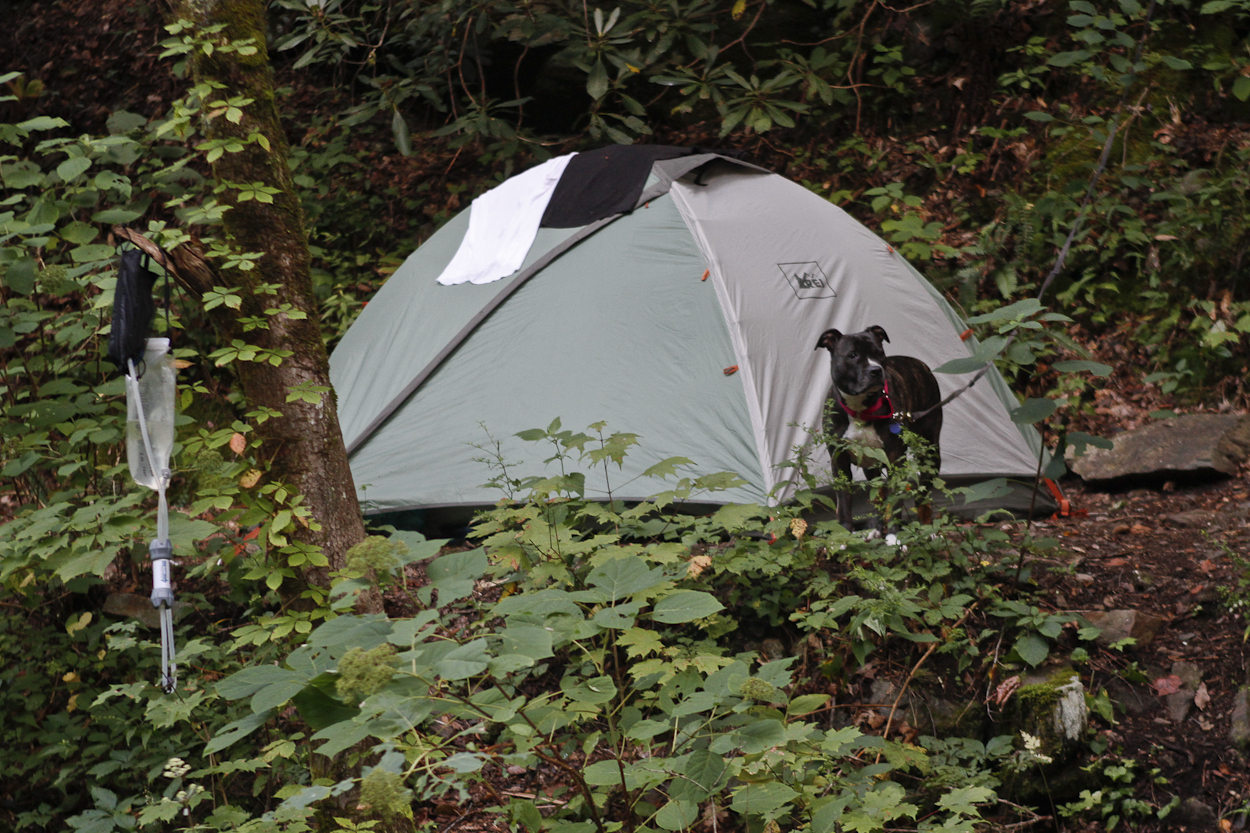 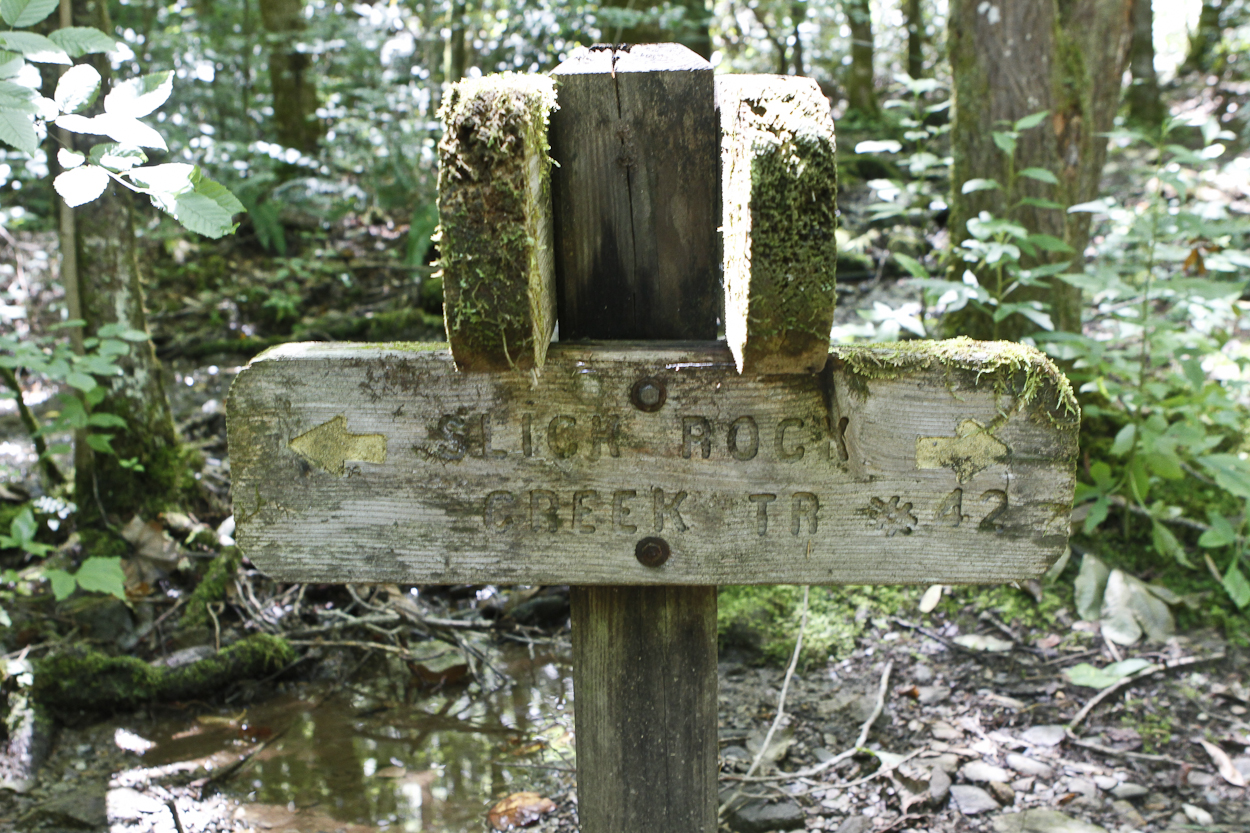 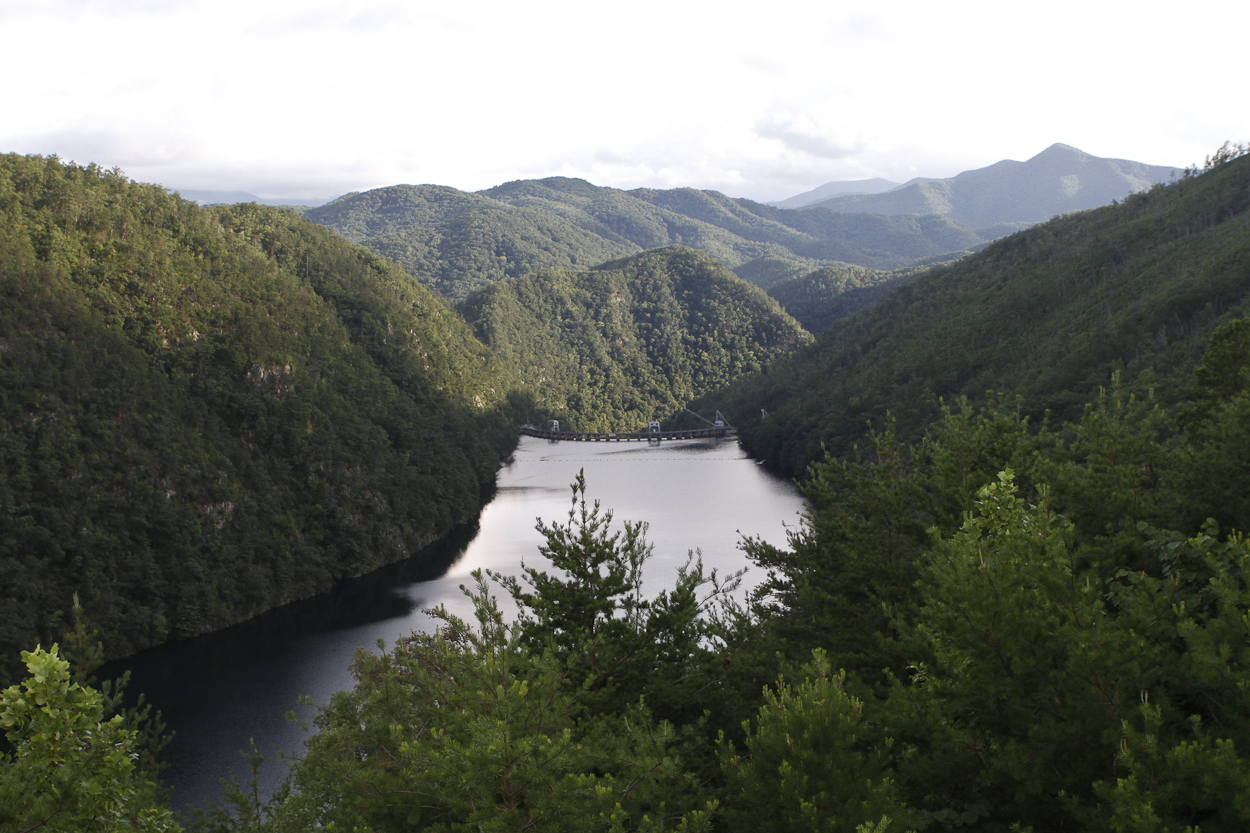