For six years now (roughly since 2009) this gal, Gail, has been making palm roses and selling them on the streets of Savannah, GA. Also known as the Savannah Rose, Gail was folding flowers in a park along River Street on a Tuesday morning when my wife and I stopped to take things in and chat a bit. 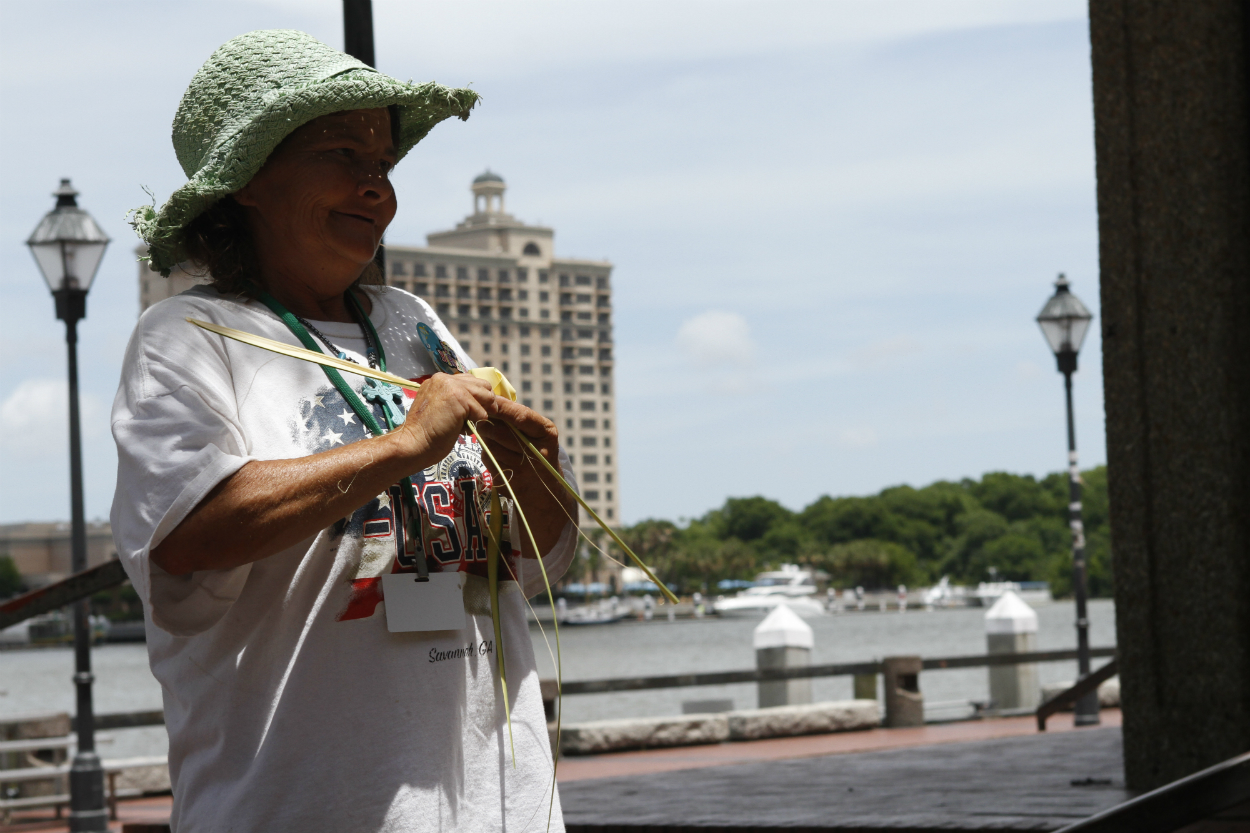 We first met Gail about five years ago on another visit to one of the South’s most charming cities. My wife, Melissa, immediately recognized her this trip as we strolled the brick-laden street. Gail picked up and moved to Savannah about six years ago, she said, after a storm in North Carolina left her with nothing to her name. Since then she has learned to make a living as one of the dozens of street vendors legally making and selling Savannah roses to folks around town. 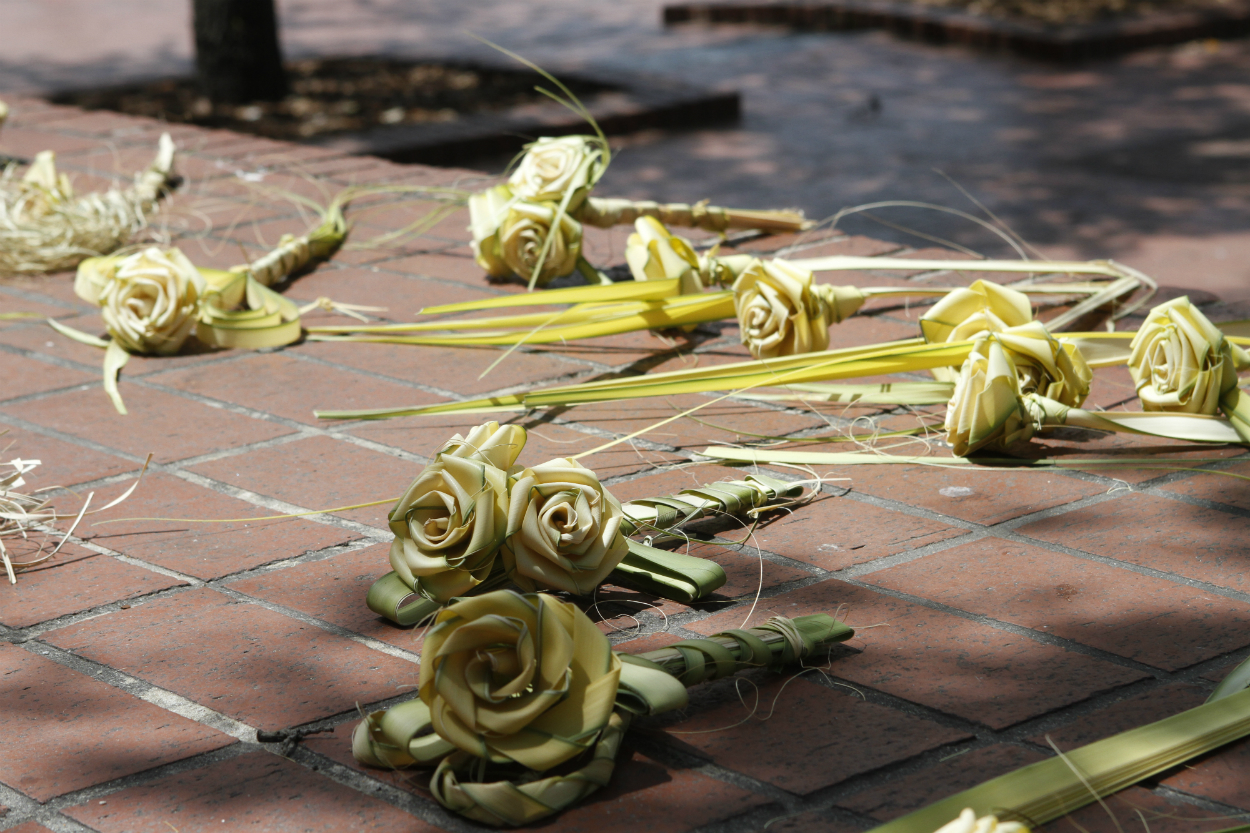 A self-proclaimed icon, Gail has been featured in a number of local news articles and she says she’s been in magazines and documentaries around the world. Most recently, she says, a Japanese documentary film crew did a segment on her work.

After we talked for a bit she insisted I get this shot of a Savannah Rose pressed against a nearby oak tree. It had already appeared in a magazine, she said, and the “mist” made by her cigarette smoke completed the effect. 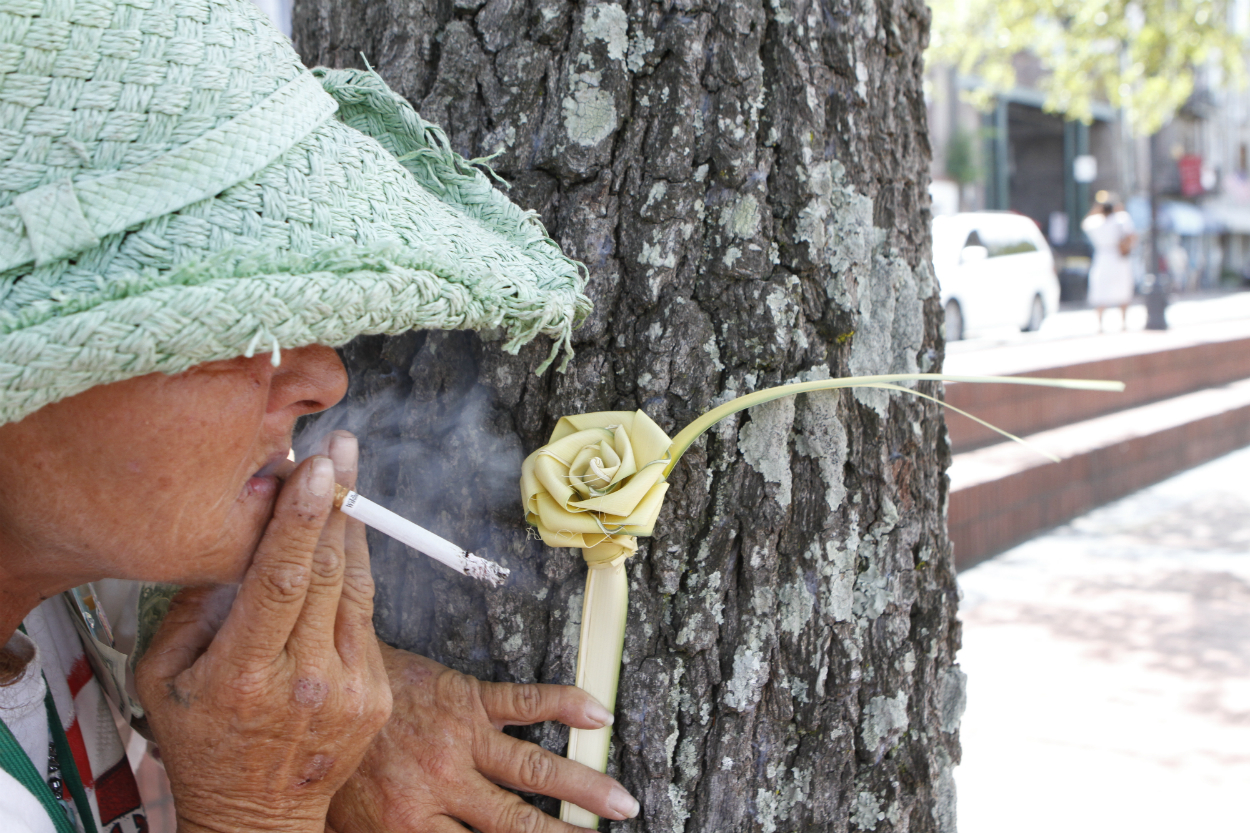 The history behind the Savannah Rose is pretty interesting, but make no mistake: Gail is a hustler. In the 15-20 minutes I spent talking with her and watching her work she easily pocketed more than $40. But that’s not necessarily a bad thing. She does good works, tourists seem to love it, and she even works in how to care for the palm roses when giving her spiel. The video above includes most of that, plus her pitch to make a heart-shaped thingamabob to honor the 10 years my wife and I have been together. She also has a lengthy segment about God and the Devil and how that relates to her work making palm roses, but I didn’t get that bit on video.

Aside for the history behind the Savannah Rose, Gail has a lot of history, too, and may be nearly as interesting. She’s just one of the vibrant street characters that make Savannah a fun, festive place to visit. If you have the chance, stop and say hi. All roses are sold on a donation basis. 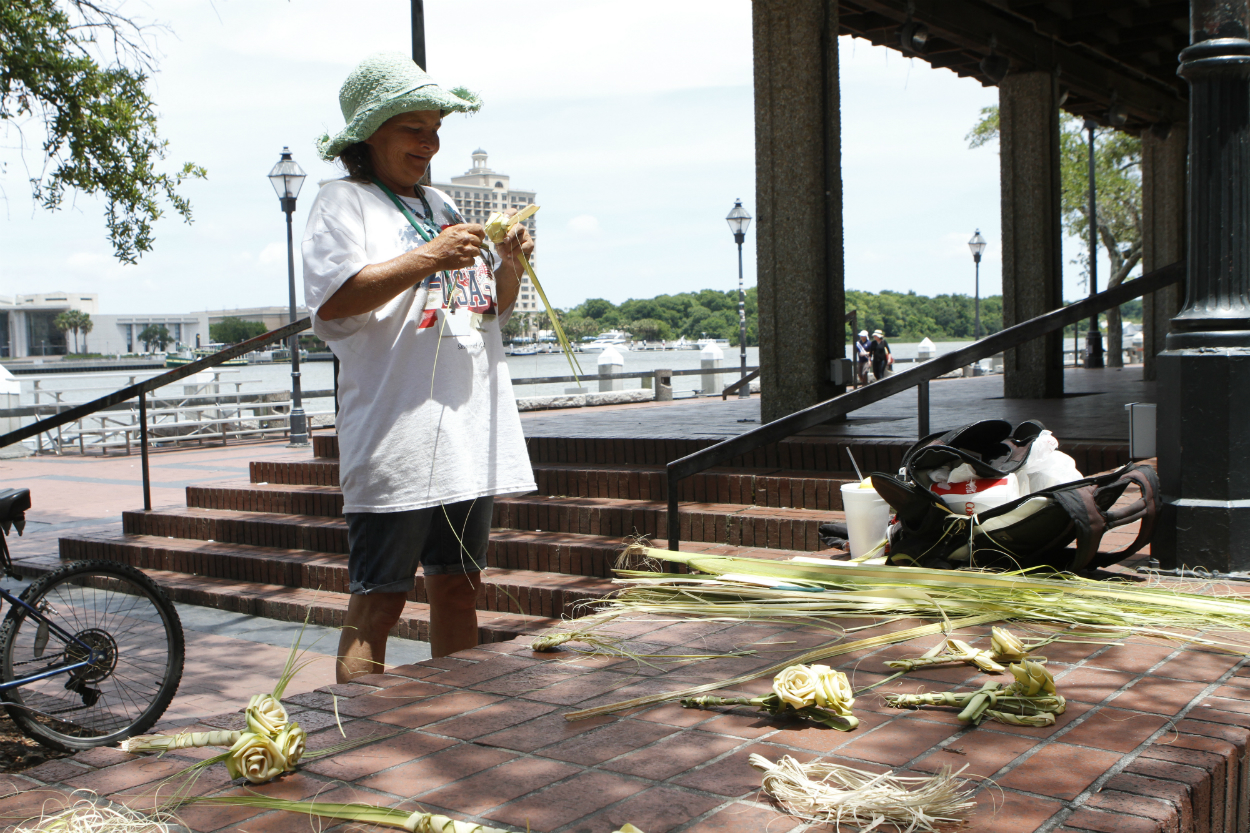 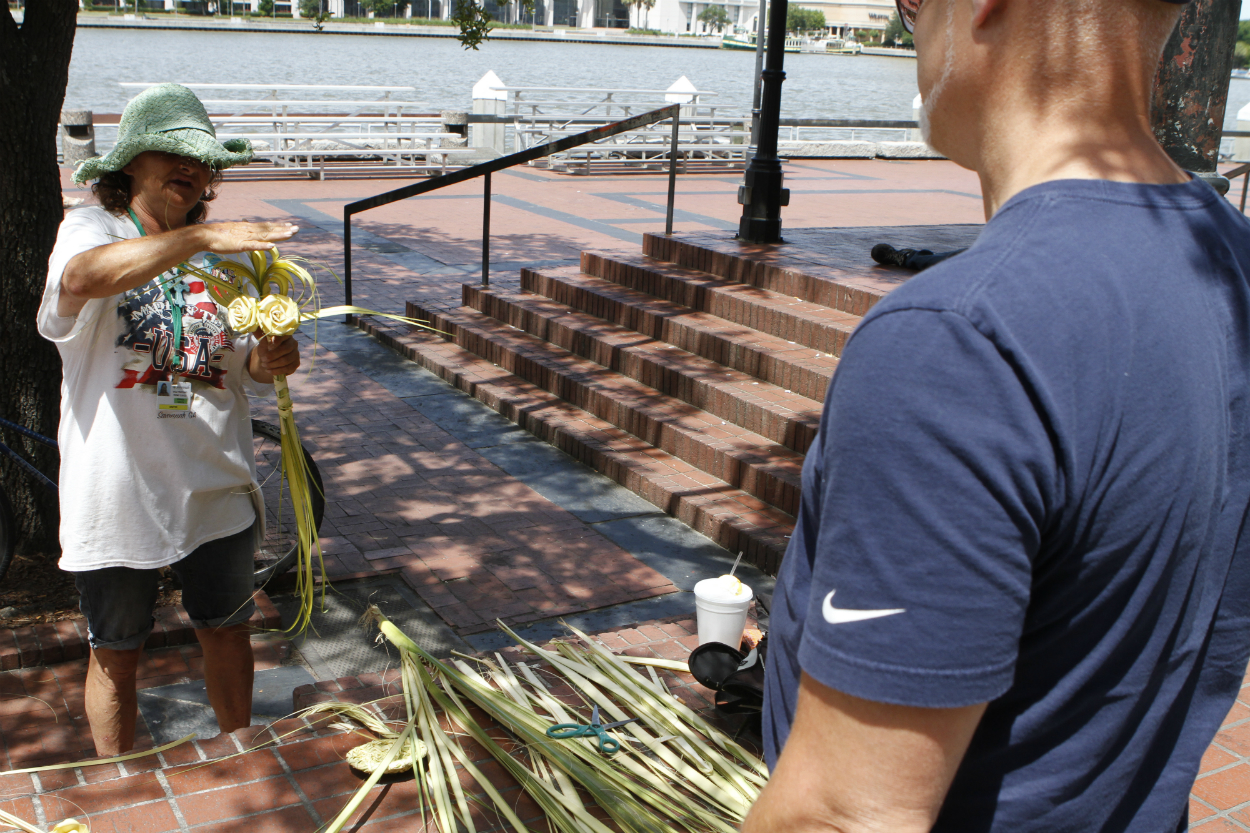 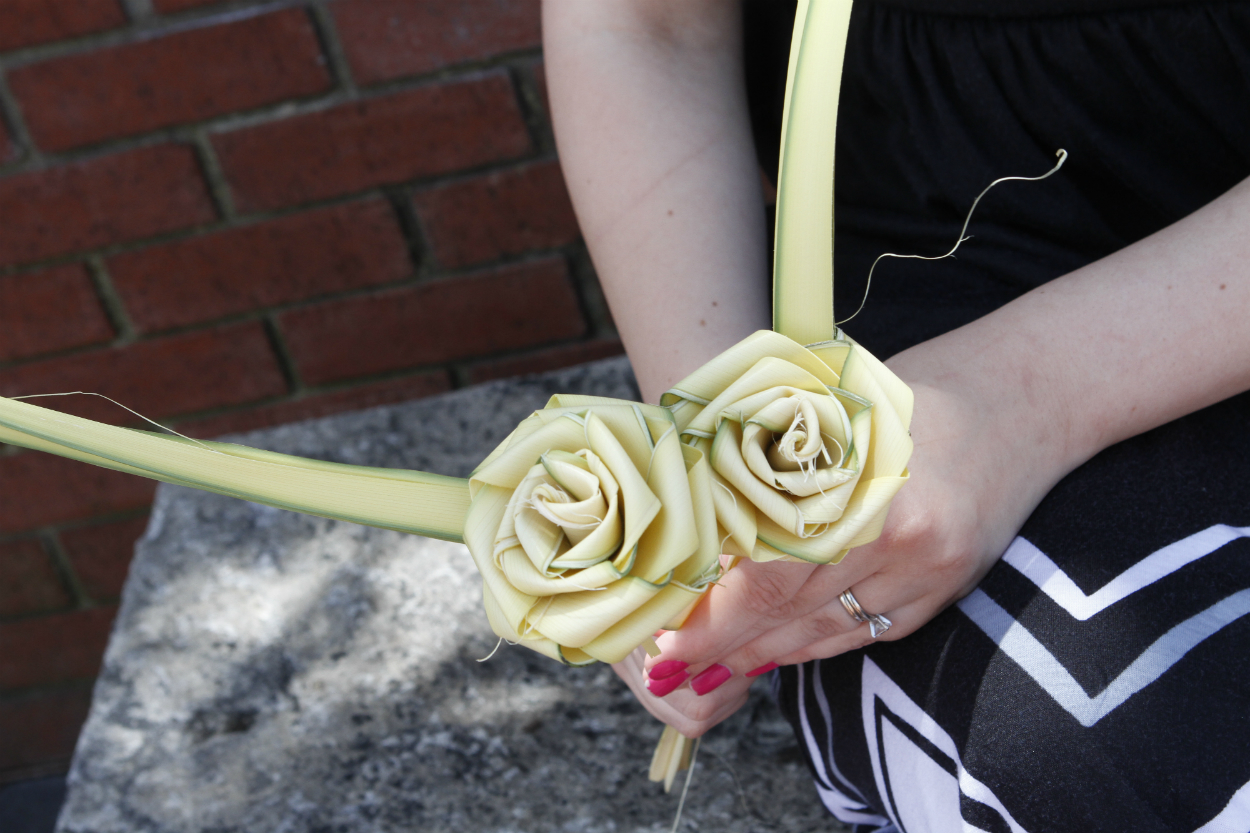