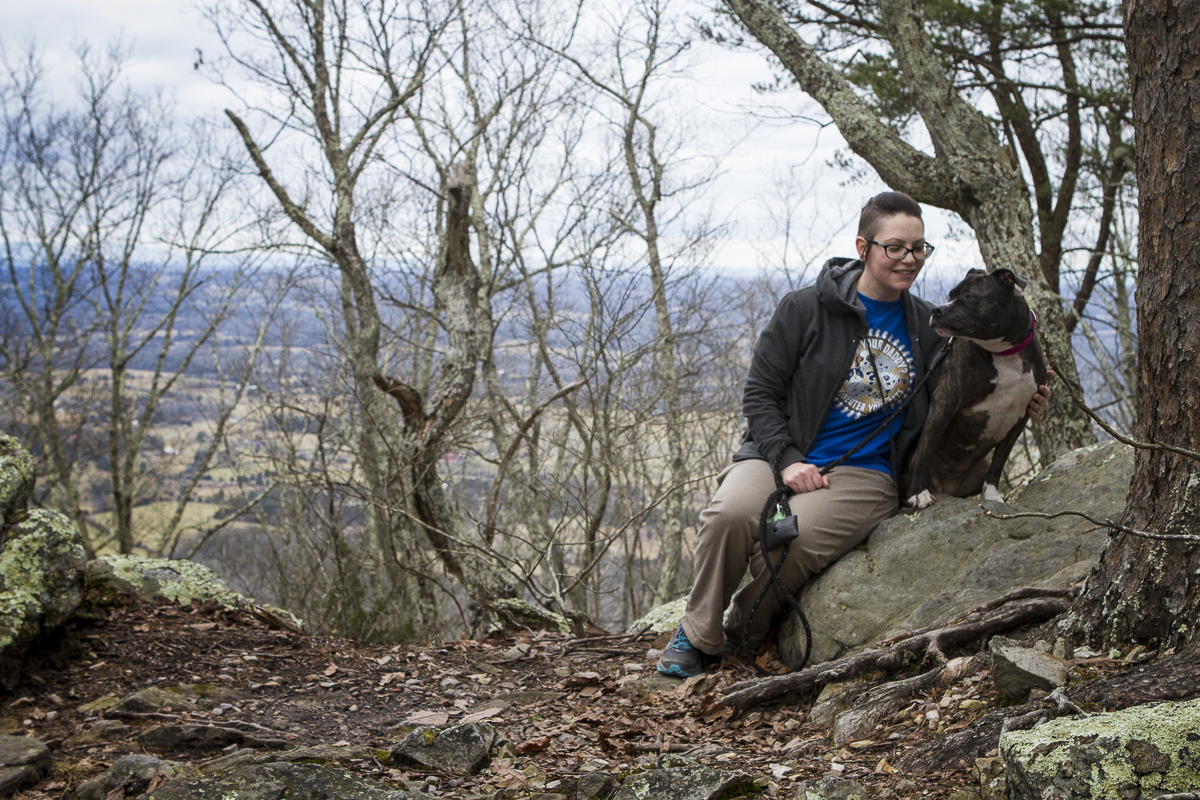 When January gives you a 60-something-degree weekend (and just a week after snow at that!), you don’t ask questions and you go outside. My wife and I didn’t argue. We grabbed pit bull Peaches and set our sights on House Mountain, a pointy bit of hill just eight miles outside of Knoxville that also happens to be the highest point in Knox County, Tennessee, and off we went.

East Tennessee is a hilly beast lined with some actual peaks, some bonafide mountains. But House Mountain probably isn’t one of them. Knox County lies in the low lands of Southern Appalachia, and while it’s basically surrounded on most sides by mountainous terrain, the highest point within the county peaks out below 2,100 feet. That would be House Mountain near Corryton, a state natural area maintained by Knox County Parks and Recreation folks. 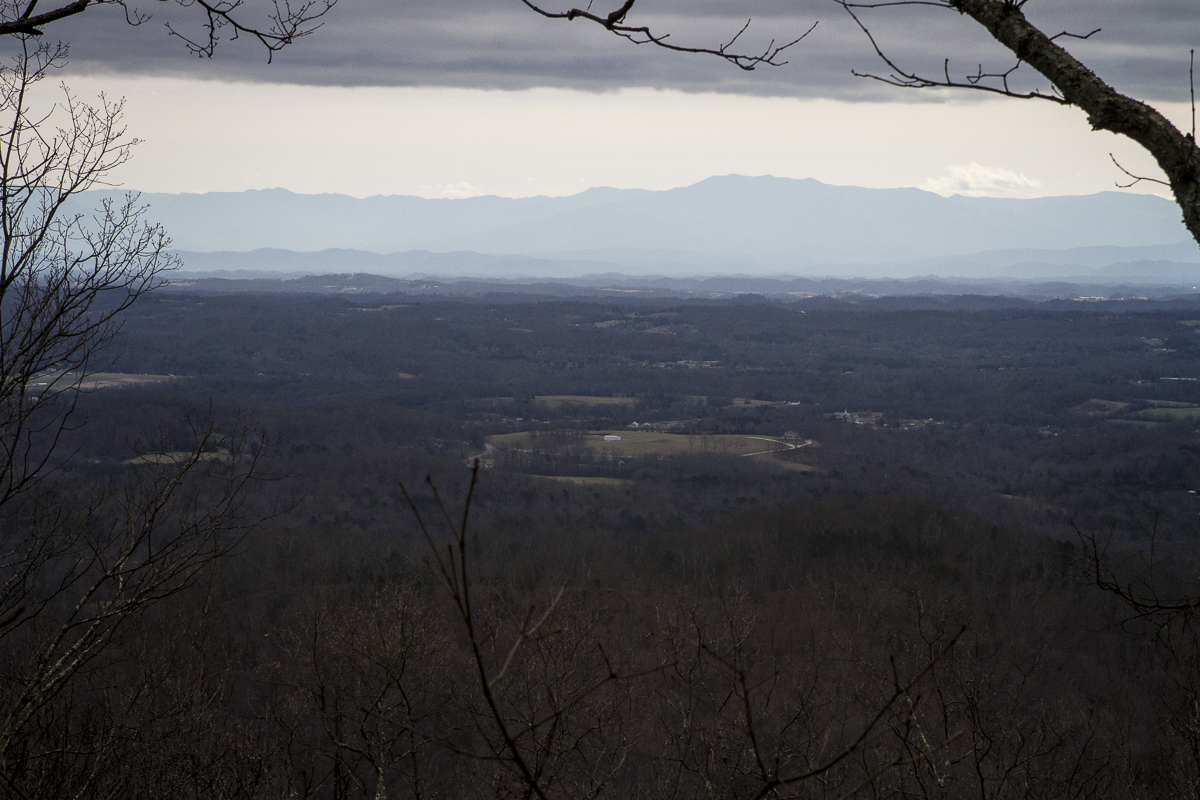 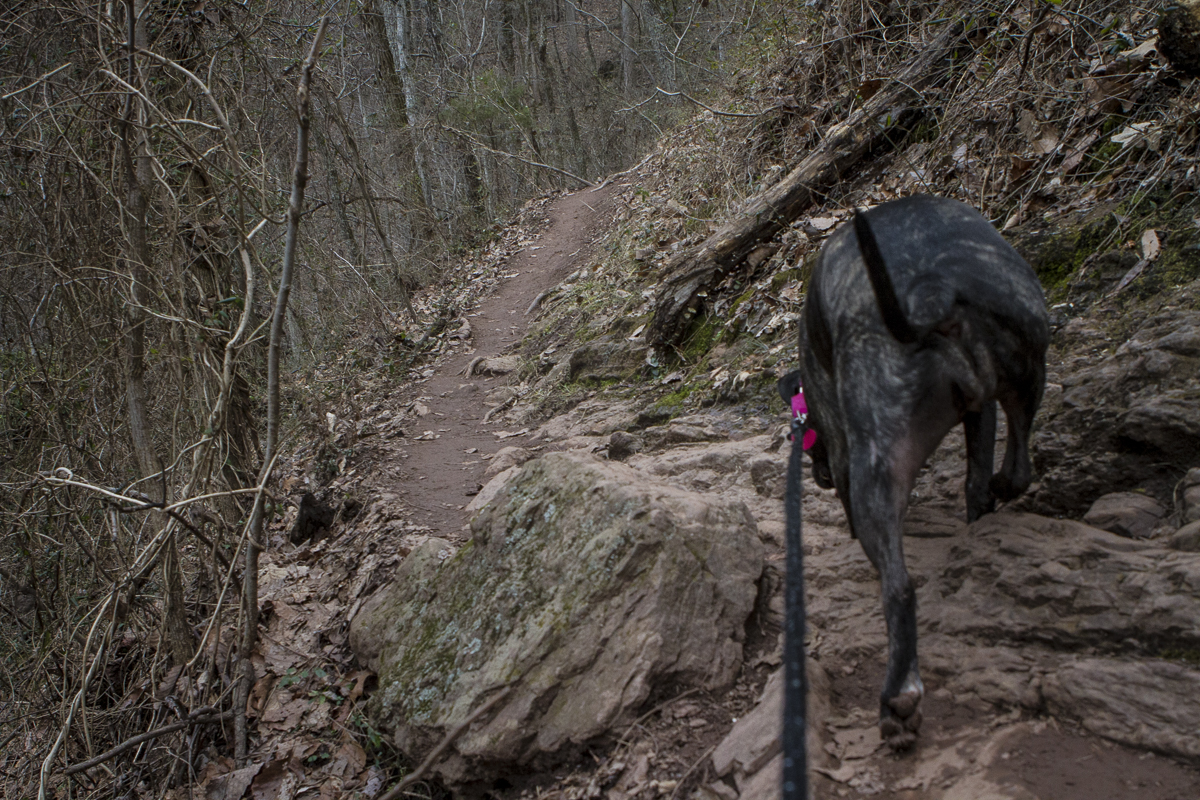 A meandering country road cuts along farm fences and property lines leading up to the small gravel parking lot, already parked to capacity when we arrived around 11 a.m. on a Sunday. Down the street the overflow lot was crammed, too, so we found a nice muddy turnout and parked along the street.

The paths are well worn — a little too well worn in some spots. Officials have even put up some orange plastic fencing to deter folks from trampling up the hillside, going near-vertical for shortcuts up the many switchbacks that lead up two different trails toward the crest. Nothing adds to natural beauty of a landscape like fluorescent plastic barriers…

We took the West Overlook Trail on the way up, a steep 0.8-mile trek consisting of rocky outcrops, muddy motes, and strenuous elevation gains over no fewer than a dozen switchbacks. But it’s less than a mile, and the steep rise lets you gain a couple hundreds feet in just a few minutes time. 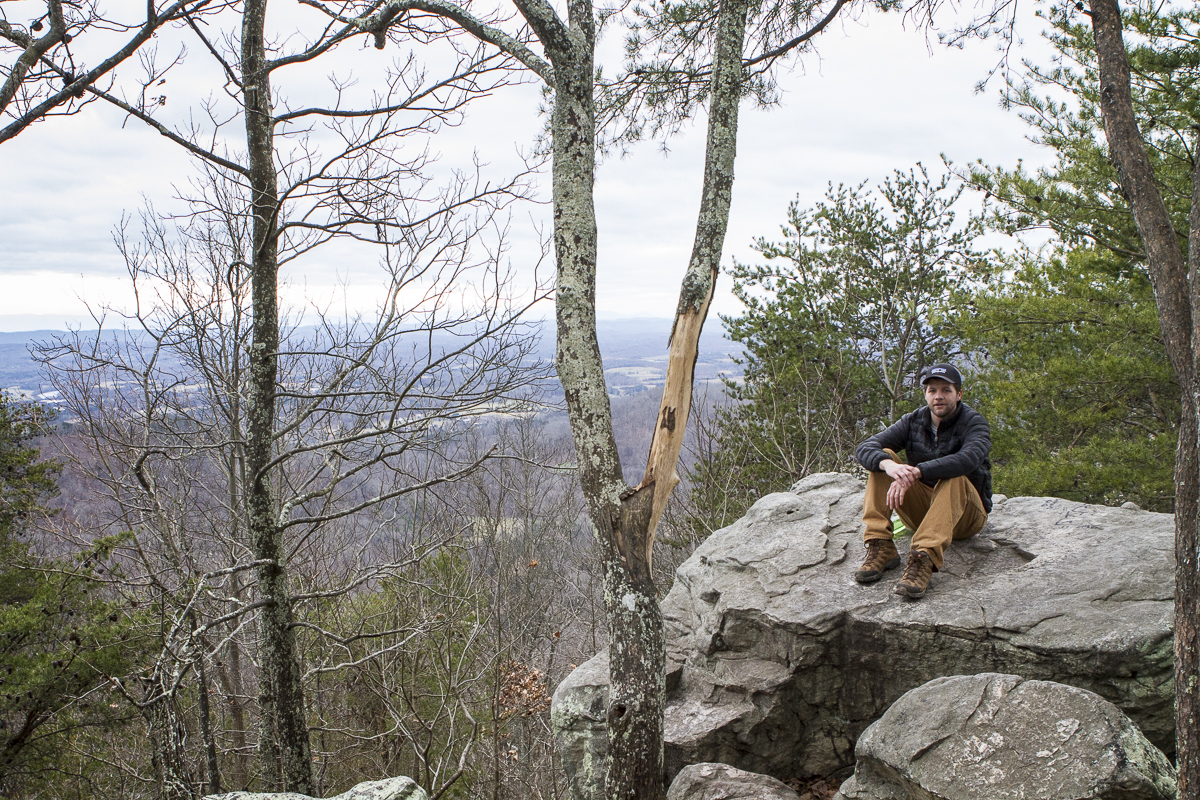 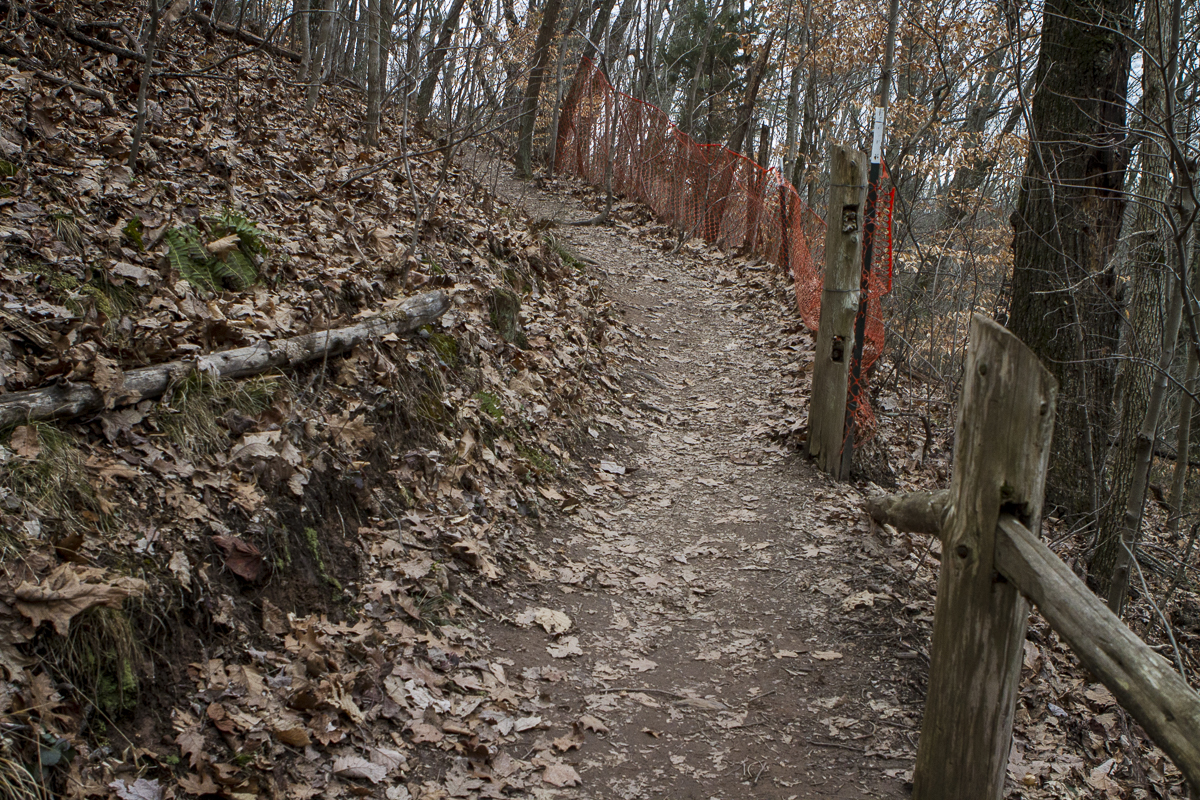 As you pick up elevation the Tennessee Valley comes into view, peaking out above the mostly-barren tree scape. It is January, after all. There are no leaves. Plots of bright green farmland form geometric shapes on the ground below. The trail is narrow and much more work than the other Mountain Trail, as it’s known, a slightly longer (about a mile) but more gradual path to reach the top. But if you’re aiming for a loop hike, as we are, I’d prefer the steeper route up and the longer route down. It’s easier on the knees.

Immediately at the top, along the western edge, a high rocky perch offers vantages of the Cumber Mountains to the west and the Smokies further south, both stretching along the horizon like pale-blue walls in the distance. Today is a bit hazy, and as soon as we round the trail onto the ridge we’re hit with gusty winds and cooler temperatures. It may be an unusually warm January day, but the breeze offers a reminder that it is indeed still the middle of winter. Stops to take in the many vistas are short lived as we shiver and shake and hike on to stay warm. 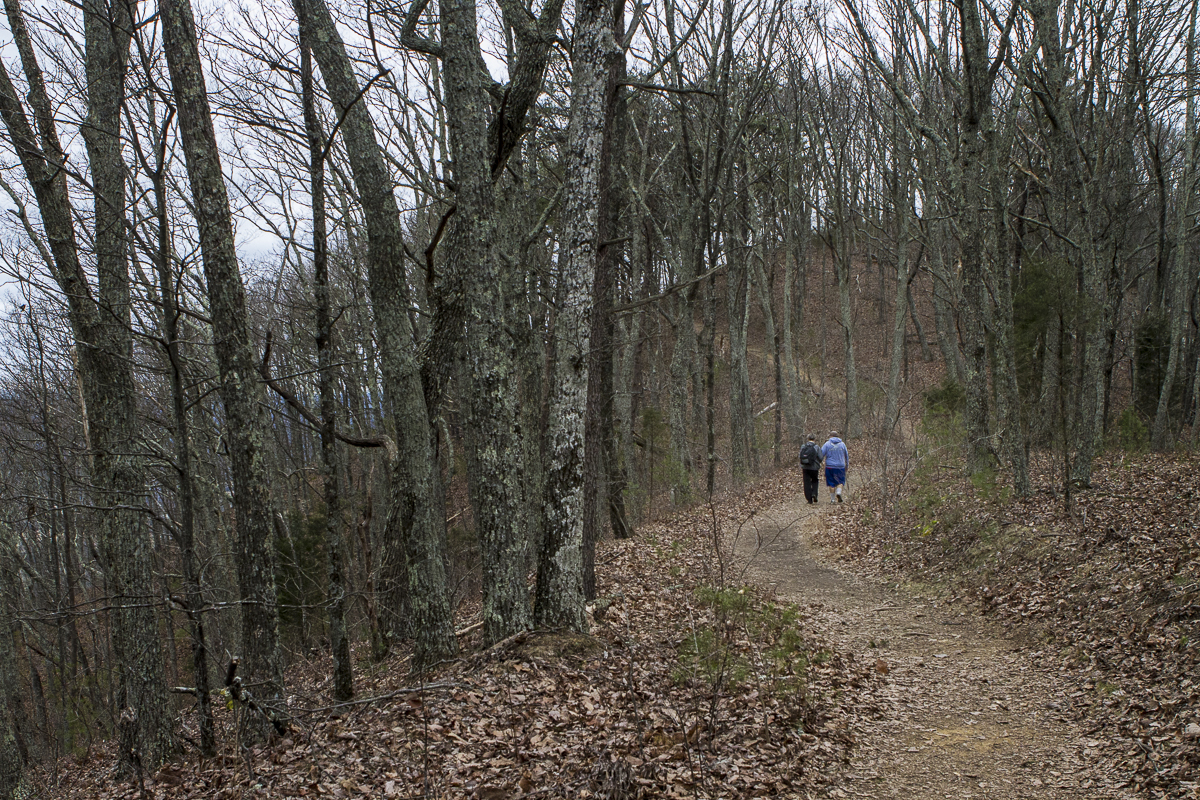 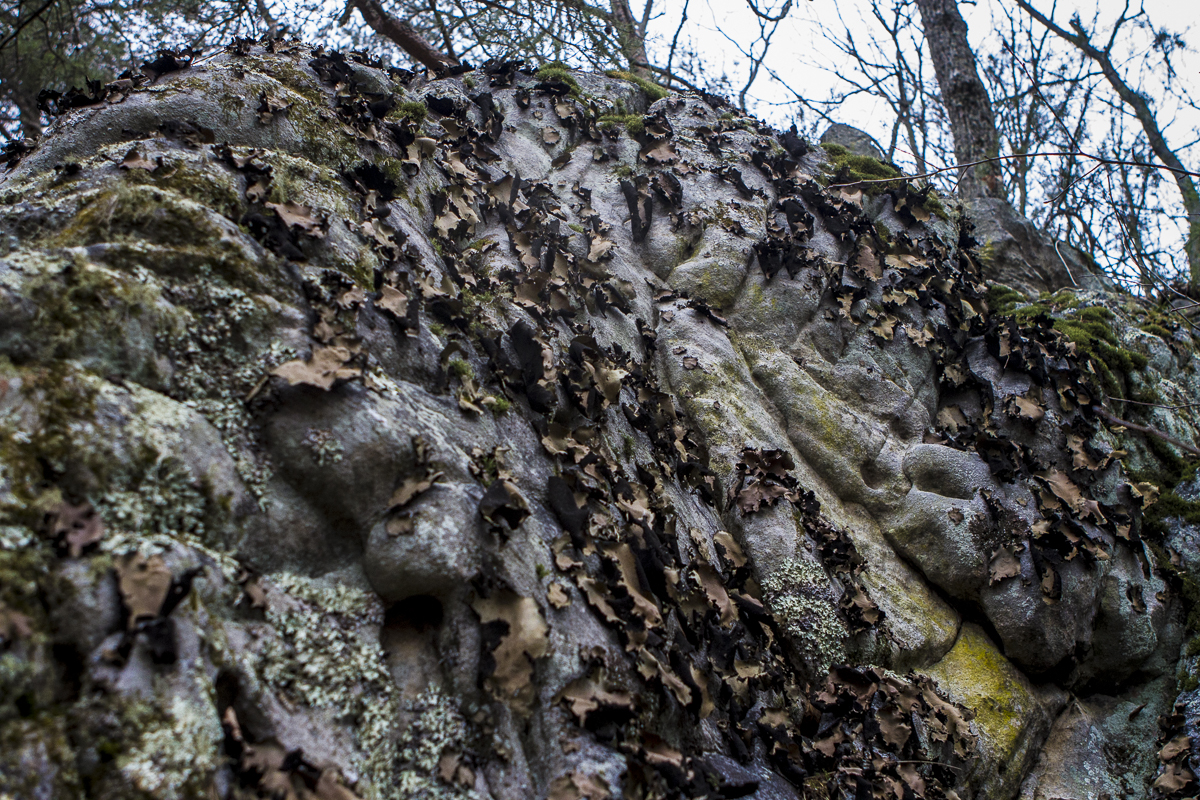 I call this place a hill because there are a couple of buildings on top, including some sort of tower for TV or radio. Nothing instills a sense of accomplishment like rise to the peak just to be overshadowed by an insurmountable tower overhead.  There’s a couple of miles of trail along the ridge, which also connect back with the Mountain Trail and a route back down without any backtracking. Roundtrip we clocked a little more than three miles. A few gaps in the trees offer different views of the valley below. We climb out on one flat rock to find a young couple tucked around the far side of a bolder, looking out over the farmlands and mountains in the distance.

Heading back down it’s a traffic jam. As the day wears on more people find their way onto the trail, no doubt taking advantage of the spring-like day as we are. But it jams up the one-lane walking path, no matter how well-worn and frequented. Dogs pass our herd, sniffing and yapping and saying hi. By the time we make it back to the bottom cars line both sides of the roadway, parked anywhere they’re SUVs and Tonka  trucks could sandwich. We’ve managed to work up an appetite and are heading for Waffle House. 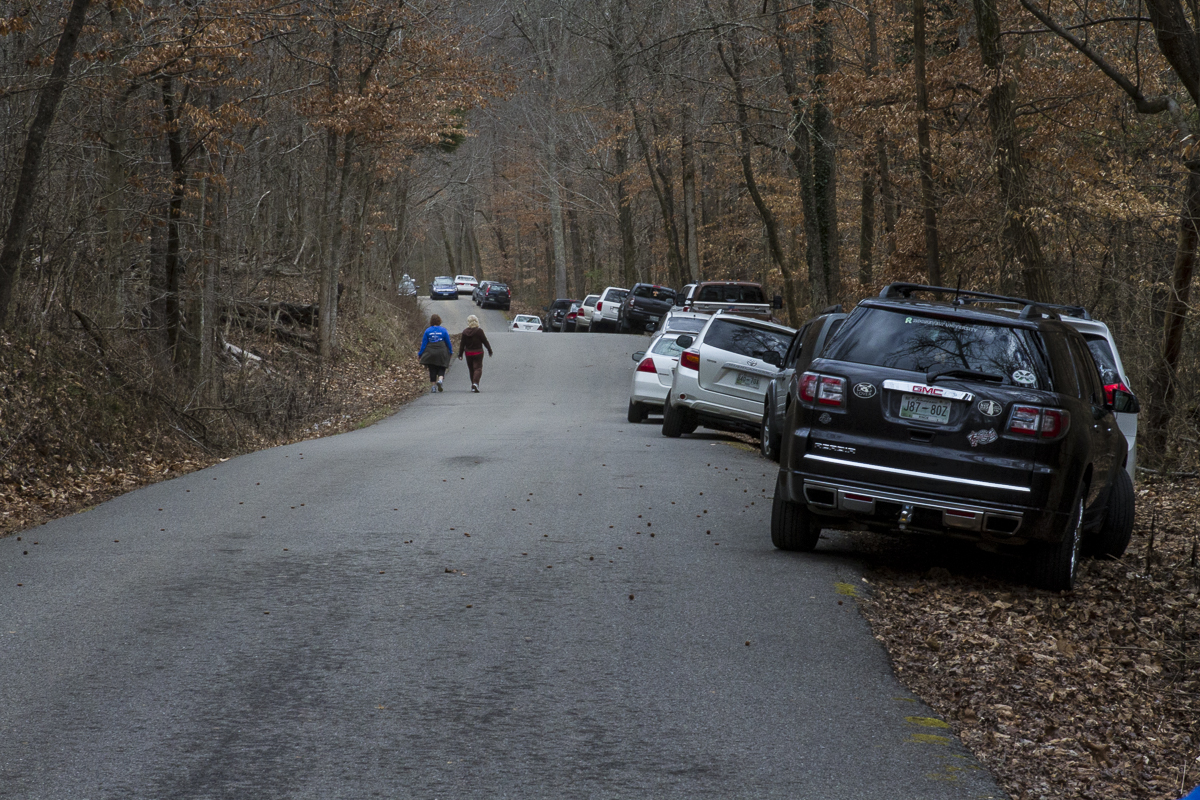 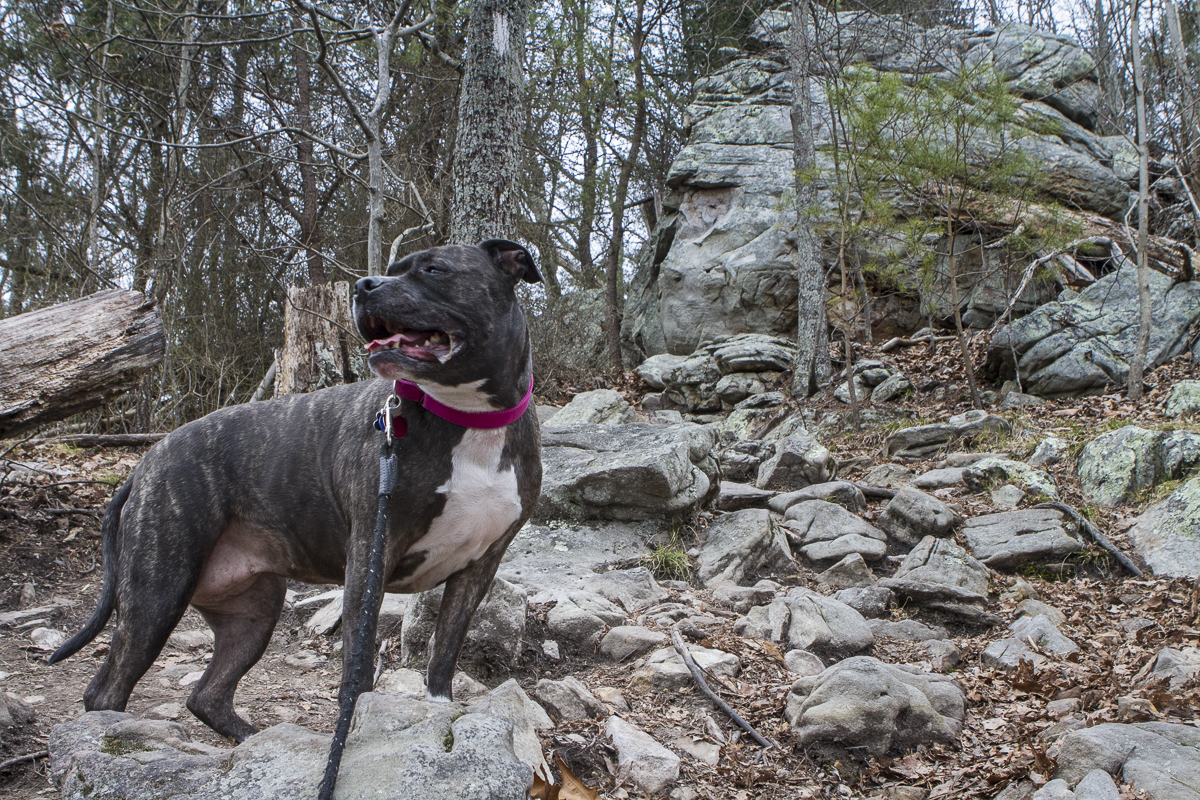 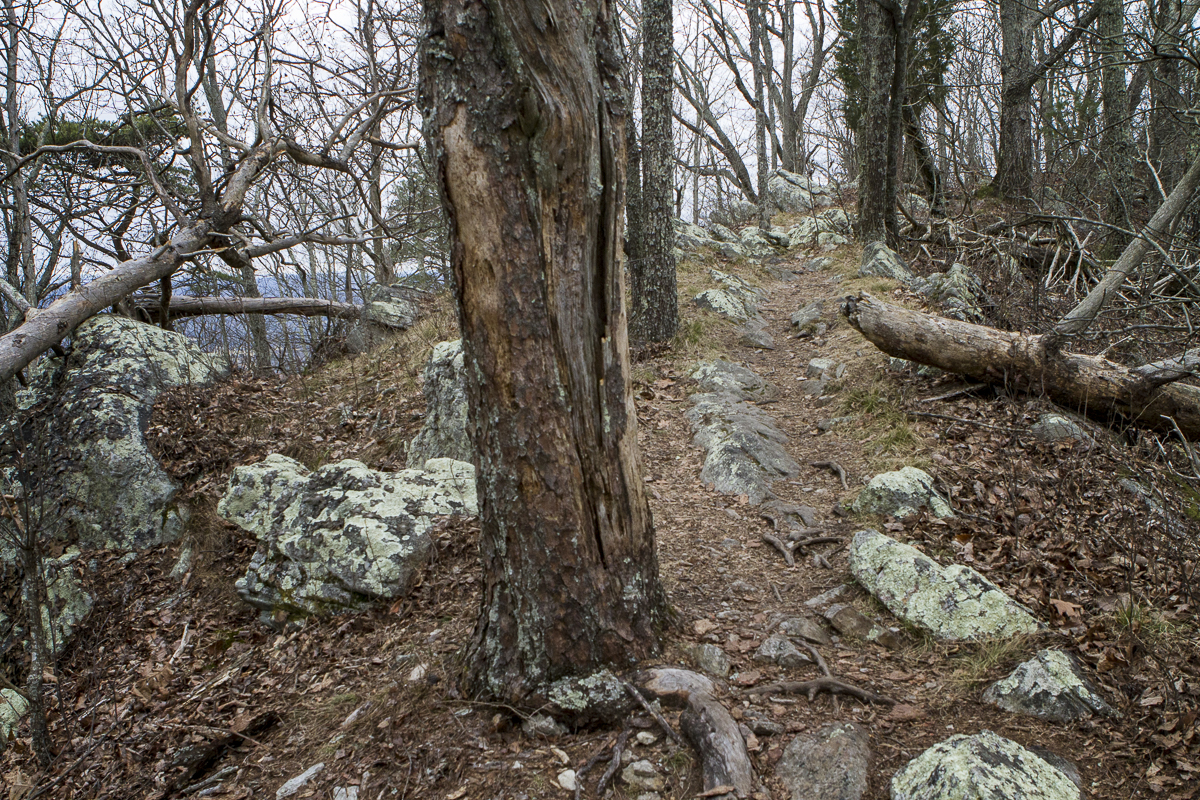 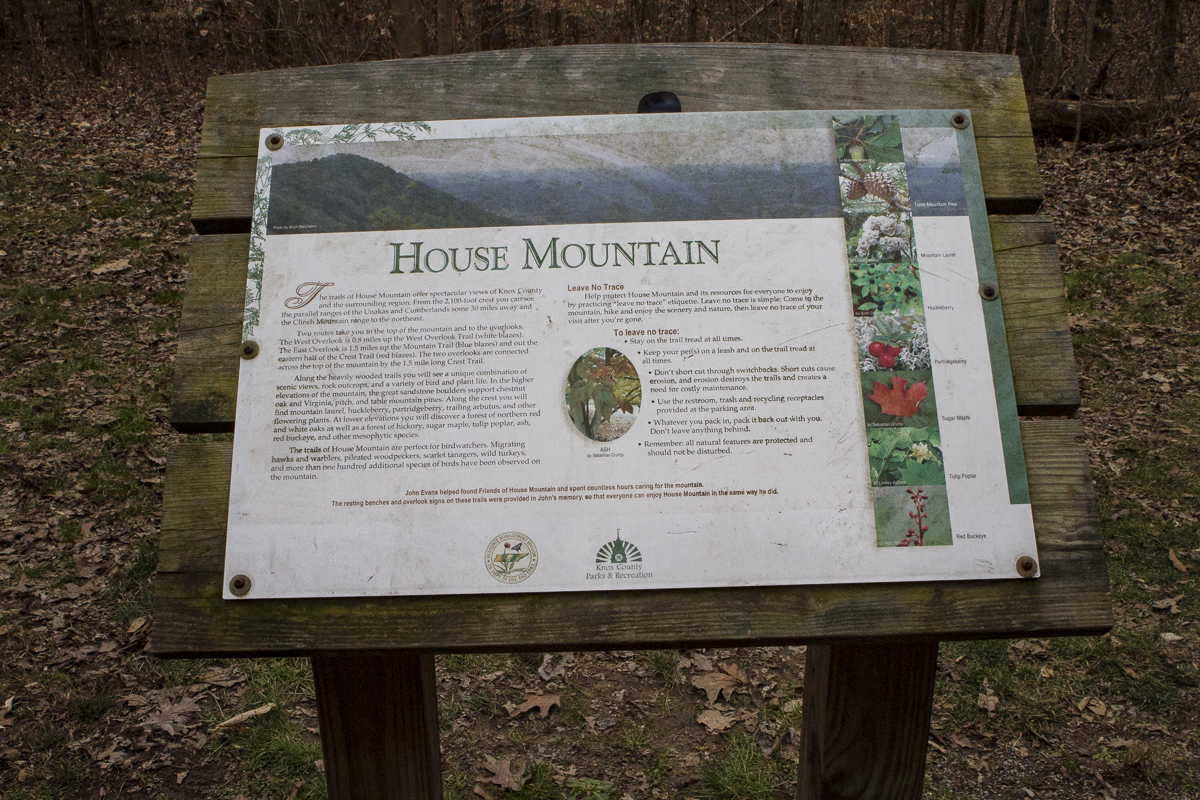